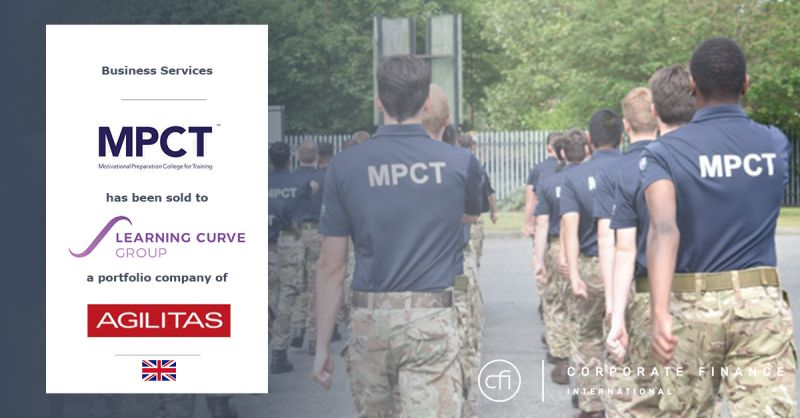 One of the UK’s largest independent learning providers, MPCT, has been acquired by Learning Curve Group (“LCG”). MPCT is the largest provider of Traineeships in Wales and is the 7th largest independent training provider on the UK Government’s Education and Skills Funding Agency contract. It was founded in 1999 by ex-Army Officer Huw Lewis MBE and has helped tens of thousands of school leavers gain practical and academic skills for both civilian and military careers.

Over its 22-year history, MPCT has received a significant number of accolades, including winning the Times Educational Supplement ‘Training Provider of the Year’, achieving 13th position in the prestigious Sunday Times ‘Top 100 Companies to Work For’ list, as well as achieving a Grade 1 Outstanding result in its most recent Ofsted inspection.

LCG is a leading UK training and education specialist and a portfolio company of pan-European mid-market private equity firm Agilitas. The acquisition of MPCT will add a further 30 locations and 180 employees to LCG’s operations across England and Wales, establishing the largest military training organisation outside of the Ministry of Defence.

CFI UK acted as lead advisor to the shareholders of MPCT on initiating, negotiating and structuring the transaction. The CFI UK team was led by Geraint Rowe (Partner), Simon Marsden (Director) and Michael Dunn (Executive).

“I would like to thank the highly experienced team at CFI UK for their role in advising, leading and executing a lengthy negotiation. CFI UK were wholly committed, provided an extraordinary level of service and steered the negotiations with objectivity. The transaction was executed in an incredibly professional manner and potential issues were carefully considered, which ensured that the process was managed smoothly. It has been a genuine pleasure to work closely with CFI UK over the last few months and I thank them for their outstanding support every step of the way.”

“CFI UK’s extensive experience and success speaks for itself, so it was a privilege to have them as our advisors on this deal. The team’s excellent commercial knowledge and advice guided us smoothly throughout the process from start to finish. We were always well informed about what to expect next as the transaction progressed, which allowed us to be well prepared and focused. We received first-class service and we couldn’t have done it without their guidance. Thank you.”

“Over the last 21 years, Huw and the Senior Leadership Team have built an exemplary business which has consistently delivered outstanding, market leading learner outcomes for young people in the UK. MPCT’s independent contribution to the UK Armed Forces is unrivalled and this transaction provides LCG with a substantial platform to expand and add significant value to the lives of young people in the UK.”

“This successful outcome is a testament to Gambit’s deep Education and Training sector knowledge and experience in delivering M&A advisory services which exceed stakeholder expectations. The transaction also indicates the buoyancy of M&A activity in the Education and Training sector at present, with high levels of appetite from acquirers for quality assets in the UK mid-market, which augurs well for the continued growth of our credentials in the sector.” 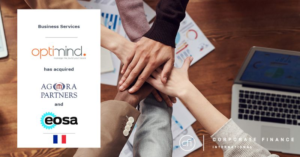 (CFI) Optimind announces the acquisition of EOSA, to become the key player of outsourcing and discretionary management for insurance firms (CFI) Breeze, LLC has been sold to Tithely